The meeting was called to order at 7:30 pm by Linda Pilcher.

We got the second P.O. Box for the Orycon mail. Paid the P.O. for the Bulk Mail.

The books are closed.

Membership was at around 1500. Received the Hotel bill, it is a little less than expected.

Security Issues: one drunk and disorderly, but the situation was taken care of without further incident. The security team could not get the members name or badge number.

Security and Con Com was having trouble with one of our members. He was creating problems for both throughout the weekend and was causing disturbances in several locations. After being warned that his behavior would not be tolerated, he kept out of trouble afterwards. This is the second year security and the committee has had problems with this person. After the convention, he approached the hotel and was trying to cause problems for Orycon 25.

Since this was more than three logged incidents by this person, there was a motion to send a letter of banning to him. The motion passed. He will be able to plead his case at the next BOD meeting.

The dates for Orycon 25 are different than what was published due to an error by the hotel. Apparently they had another group already booked for that weekend and had Orycon 25 booked for the following weekend, and forgot to tell our hotel negotiators about it. Melanie and Patty will be having a meeting with the hotel later this week. Everyone who was invited and all who bought memberships will be informed of the date change.

We have about 200 pre-registered members and 20 dealers.

GameStorm divided its surplus between OSFCI and its Charity. Game Storm 2002 books are closed.

We have 125+ pre-registered members so far. Score has offered to host a DragonballZ tourney again this year. We plan to have a better child policy in place this year, and plan to use Rangers this year.

No report. Orycon 24 has not been able to give them the receipts for the auction yet.

This years winner was Ursula Le Guin. She donated her winning to the Endeavour Awards. She also plans to head up a fundraiser later in the year for us. Jim asked if the finalists for 2003 could be announced at Westercon in Seattle. Consensus thought it was a good idea.

Jim asked if the BOD could go to executive session. The motion was made and passed.

The BOD adjourned to executive session.

The BOD returned from Executive session.

Jim mentioned that over 25 books had been submitted so far.

The Awards went well. Jim suggested that there should be more at con publicity for the award ceremonies.

Researching line of credit accounts right now. Will research where each department is spending money, so we can find the best methods to make purchases at a less expensive rate.

SmofCon has been considering Portland as the next West Coast sight. Patty said she did not want to chair, but would ask around and see who might want to.

GameStorm submitted a verbal intent to bid for 2004.

Lea mentioned that GameStorm was handing out promotional material at the opening of the Lord of the Rings, and asked if this would be an appropriate marketing for Orycon. It was decided that it would be a good method.

The subject of creating a logo for Orycon came up. After much discussion, a motion was made to have Lacey Axmaker to hold a contest for logo creation with a budget of $200 ($100 for prizes and $100 for postage and misc. costs). The motion passed.

The subject of renting the card printers came up. After some discussion it was decided that OSFCI should charge $0.20 per badge (based on the average attendance of the convention renting the machines) 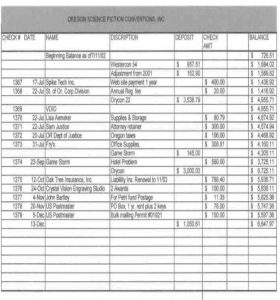